Just because I’m crying, that doesn’t mean I’m upset. Maybe I like hiding under the covers and laying in the dark.

Don’t ask me why I’m crying. I don’t really know.

I’ve had this problem all my life. I’ll cry at the drop of a hat. I’ll cry at the thought of crying. I don’t really understand it, but I’ve gotten used to it. I don’t think about it too much. I’ll cry for a while, maybe a long while, and then I’ll move on and be over it.

The problem I’m having now is that my husband takes it personally and it’s getting harder to move on after one of my “meltdowns” as he has started calling them. I’ve tried explaining myself and he does know that “meltdown” is not the right word to describe what happens on these occasions. 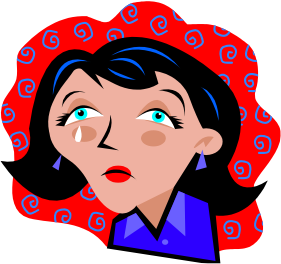 Usually there’s some kind of trigger and the last few times they have all been different. Once I was under the weather, sick to my stomach, but trying to participate in a tour of a possible wedding venue for my stepdaughter. When my eyes became teary, and when he asked me why I was upset, the waterworks began in earnest and no matter what I did i couldn’t stop them. The more I thought about it the more embarrassed I became and the harder I cried. I couldn’t stop. I had to go home and remove myself from the situation. As it turns out, I was running a fever and had some kind of stomach flu, but that doesn’t really explain the tears. It didn’t quite convince my husband that I was not crying because I was jealous of the attention he was showing his daughter. Or that I was feeling slighted in some way.

That was his first and, in his opinion his best, guess as to what was wrong with me because that’s what he thought was wrong the last time I had a so-called meltdown. That time we were at his cousin’s house, sitting by the pool, relaxing with friends and family. Everyone was loud and excited and jumping in and out of the pool and having a great time. I was content sitting on the sidelines. Until they started calling for me to jump in and join them. That’s when the trouble started. I can’t really explain what happened except that I ended up having to go upstairs and try to compose myself so I didn’t look like a complete idiot and embarrass my poor husband any further. I was feeling overwhelmed. It happens to introverts and it’s happened to me before. But he (my husband) thought I was feeling left out and jealous of the attention he was paying everyone else.

I will admit I have a bit of a jealous streak. But I’m not jealous of his daughter, or his cousin. When I cry, it’s not really about anyone other than me.

It’s all about me, really.

I wish I could change these things about myself. I’m sure there are many of you out there wishing there was something about yourself you could change. If I wasn’t so sensitive and perceived slights and wrongs where there really are none, or at least no intentional ones, then maybe it would be easier to keep my eyes clear and dry. I’m actually giving myself a pat on the back right now for not breaking down while I’m writing this (which would make typing pretty hard). Usually the thought of crying and recounting tales of horror like that are enough to open up the flood gates.

Maybe there’s hope for me, yet. I really am trying to be better. But if my period’s about to start, please cut me a little slack — it’s always worse then. In the meantime, my dear, please don’t ask me if I’m having another meltdown. Thanks!